In August 2009, MTX completed the remodelling and installation of a single ultra clean operating theatre and recovery area at Heatherwood Hospital in Ascot. The new 164m² theatre suite has increased the total number of theatres at the hospital to six allowing the Trust to accommodate the 20% increase in demand for orthopaedic procedures seen at the hospital over the last year.

The Trust approached MTX in November 2008 seeking a permanent but fast track solution. Because MTX had already renovated and installed two out of the hospitals five operating theatres over the last decade and in light of a full value for money analysis carried out by the Trust’s cost consultants Osbourne’s, the Client applied for MTX to be contracted under a fast track single tender action (STA).

The Trust had no budget or space to extend the hospital further therefore an appropriate area within the existing hospital building needed to be found to accommodate the new operating theatre and recovery area. It was proposed that MTX would design and install the new theatre to fit snugly within a redundant waiting area situated off the main hospital corridor, close to the existing five theatres.

Along with the critical Health and Safety considerations paramount for any job of this nature, the other two major considerations for the project team were to maintain access to the central corridor as the main thoroughfare through the hospital and secondly, to ensure the existing (still in use) operating theatres were not disturbed during the project. Due to the proposed location of the new theatre, its very central location within the hospital building and its close proximity to the existing theatres, ensuring minimal disruption and maintaining safe access was extremely difficult, however thoughtful and disciplined working practices were employed to find the right solutions.

In order to maintain the hospital’s main corridor, a temporary screen was installed along the length of the construction area providing a sealed perimeter for the new theatre. This allowed all construction works to be carried out in a completely isolated area, minimising the amount of disruption to patients, staff and visitors. This temporary screen also ensured that any disruption to the daily running of the hospitals original theatres was kept to an absolute minimum. In fact only in the last week of the construction programme, after careful consideration and coordination with theatre management team, were MTX able to complete the final piece of the jigsaw and link the new theatre with the existing five theatres.

MTX were also contracted to design and install a new purpose built external plant deck which had to be designed around the existing flat roof construction. The hospital building, which was originally built in the 1800’s and extended in the 30,s 60’s, 70’s and 80’s also had to be considered, ensuring all architectural features stayed in-keeping to maintain its external aesthetic appearance.

The newly installed ultra clean operating theatre suite was handed over to the client on the 13 August 2009 after an onsite construction period of only 14 weeks. 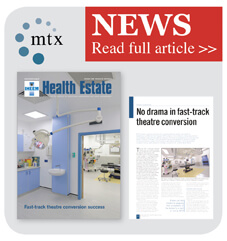 “The project had to be completed to an extremely tight schedule, but despite the considerable time pressures, and the structural and other construction challenges MTX faced, they delivered the new theatre on time and on budget, which was critical for us, to a very high standard”  Anthony Downey, Head of Estates and Capital Projects, Heatherwood and Wexham Park Hospitals NHS Foundation Trust

“When I saw the finished facility I thought it was absolutely stunning, especially given the very limited space MTX had to work with. The company also extremely skilfully managed the job in a way that saw us able to carry on performing all our usual work without any significant disruption, which was a considerable achievement in itself. The standard of finish and fit is first-class and we now, as a Trust, undertake all our orthopaedic procedures at Heatherwood hospital, which has become a centre of excellence for this type of surgery”
Mandy Claridge, General Manager, Surgical Services at Heatherwood and Wexham Park Hospitals NHS Foundation Trust