On July 13th 2015, MTX were successfully awarded the contract to design and build a 16 bed Modular Adult Care Ward for the Wye Valley NHS Trust at Hereford County Hospital. The project was successfully completed and officially handed over to the Wye Valley Trust for patient use on the 15th December 2015.

The Wye Valley NHS Trust required an urgent bed ward to provide 16 additional acute beds. The new building was to be connected to the existing main hospital via a 19 metre long traditionally built link way corridor and supported by the existing mechanical and electrical infrastructure.

Groundworks for the new project commenced on site in July 2015. As the development site was located within a former medieval burial ground, archaeologists worked alongside MTX during the ground works to minimise archaeological disturbance. A special sequence was agreed with the ground worker and archaeologist to ensure each pad location was prepared ready for inspection and agreement to proceed with the works from the archaeologist. Any remains discovered were observed, recorded and removed by the archaeologist ready for a complete log and re-burial at an agreed parish location. A steel gantry was also introduced to minimise the amount of pad locations required to house the modular building.

The complete building which comprised of 19 modular units was delivered and installed in position over a three day period. This lift was carefully coordinated in order to ensure that the hospital’s departments, roads and surrounding areas were not affected in anyway.

The new facility consists of a 16 bed unit ward comprising of assisted WC shower rooms, en-suites and a curved reception within the main corridor. A new link way was formed to connect the new modular facility to the existing building.

Internally the scheme was specified and finished to a high standard with durable white stelvetite prefinished walls and American oak vinyl flooring. Colour coordinated laminated doors with integral Vistamatic vision panels were installed to assist patients suffering from dementia and for patient privacy.

Monodraught sun pipes were incorporated in to the build to allow for natural daylight providing a bright, airy and spacious facility. 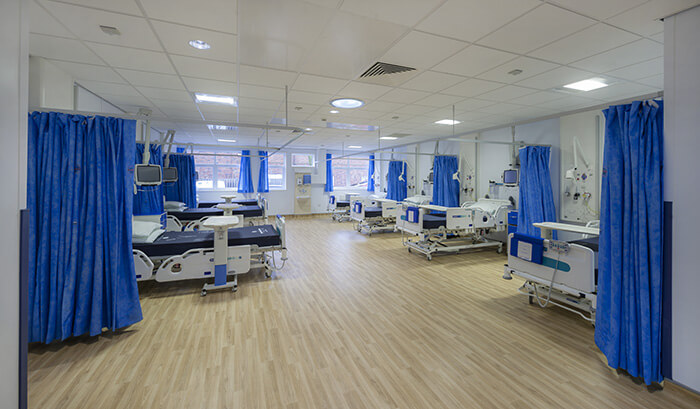 As the building’s footprint fell within an area of archaeological interest area, numerous excavations were undertaken prior to the commencement of the groundworks on site, with all findings recorded. The groundwork’s solution had to be designed to minimise the level of excavation on site. During the excavations a number of archaeological remains were discovered, excavation ceased allowing the archaeologists to investigate. MTX worked closely with the Headland Archaeology to ensure that any findings were respectfully exhumed, relocated and logged accordingly.

“MTX were extremely proactive, accommodating and understanding of our needs. The project included groundworks that revolved around archaeology and the contractor acted in a compliant manner, engaging with all stakeholders and contributed to the mitigations required to minimise impact on cost and time. Their approach enabled us to be relatively flexible with design, development and to a degree beyond the prescribed fabrication dates”.