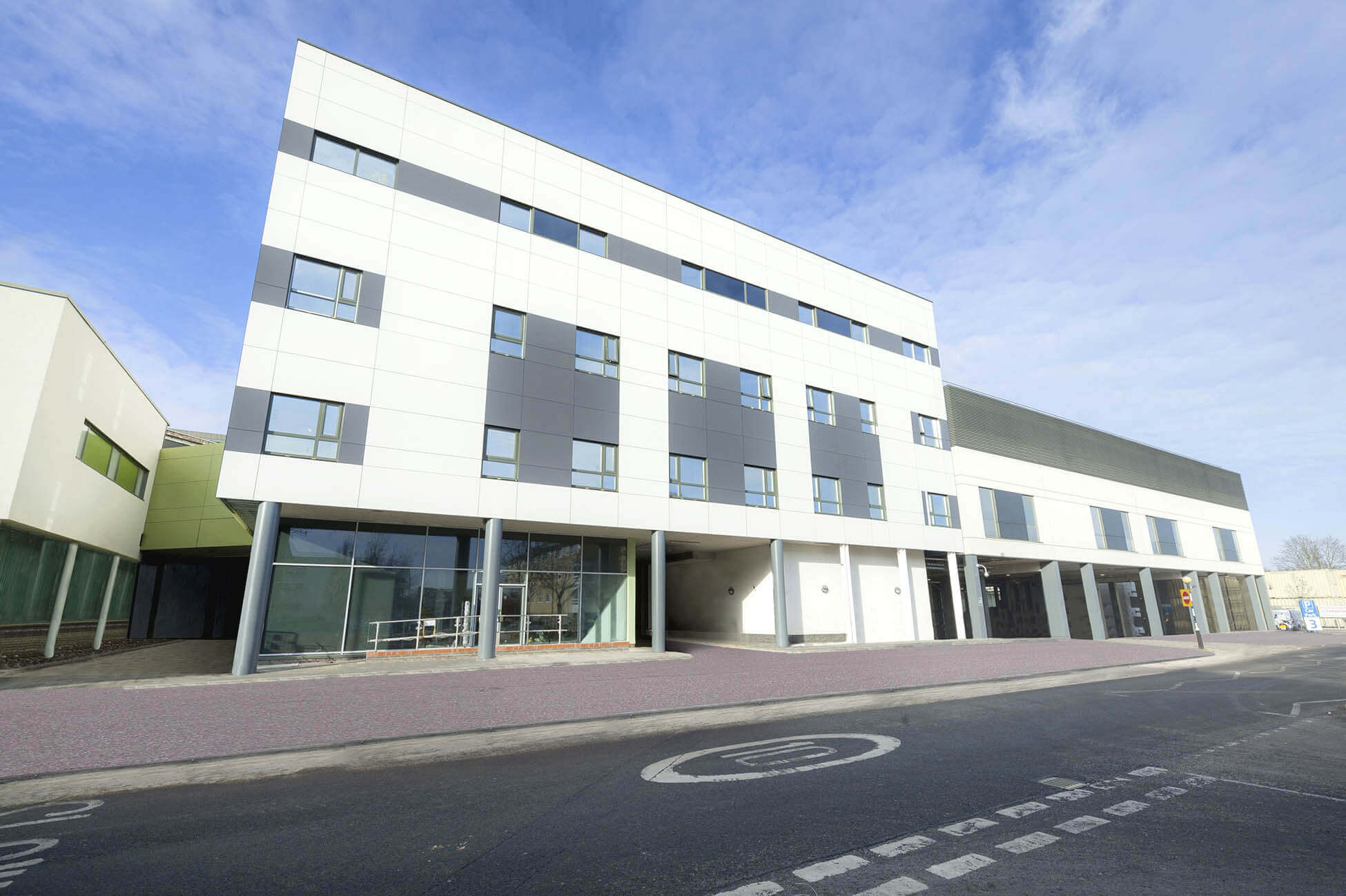 In December 2014 MTX were awarded the contract to design, install and commission a new five storey modular extension. The project was completed within 49 weeks.

London North West Healthcare NHS Trust required a new modular development to provide acute ward accommodation for forty eight bed spaces along with fifteen bed isolation wards and ancillary rooms. This was to be housed over five storeys of modular accommodation including a curtain glazed main entrance and top floor plantroom. The main building was to be built on a transfer structure to allow continued movement at ground floor of ambulances serving the new facility. 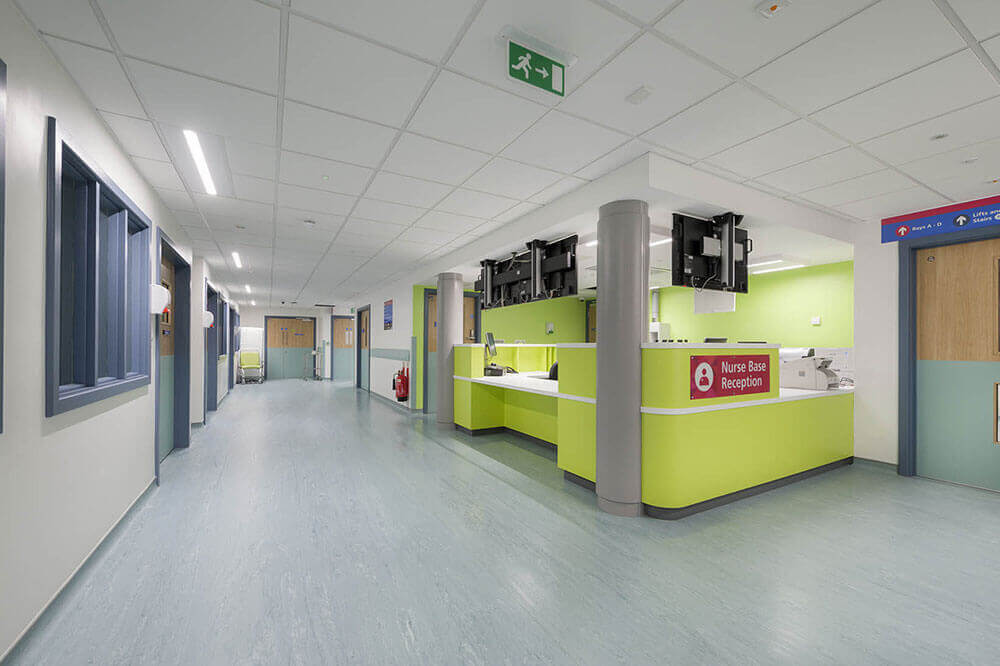 The new modular wards are positioned in a tight space between the hospitals existing operating theatre suites and emergency department. One of the key priorities for the new ward was a good connection to the existing emergency department. This link was provided by a main link corridor approximately 50 metre length along with an open plan link area.

Planning of the foundations was a challenge due to the existing location at a main substation, HV and LV cables and the main medical gas oxygen supply to the hospital. To greatly reduce any disruption to the Trust and due to the concentration of loads at column positions, an augered pile solution was designed which incorporated 172 piles with diameters ranging between 325 – 450mm.

The main accommodation was split over three floors with a 24 bed design to Level 3 and Level 4. Level 5 is a state of the art isolation ward with fifteen isolation rooms including positive pressure lobbies. Each floor is served by two lifts with the lift lobbies being designed with graphic designed décor stating the name of each floor (named after Crick, Darwin and Elgar).

Repeatable room designs were utilised throughout the floors with four bed multi wards, single bedroom accommodation and standardised isolation rooms. Each floor was served with a modern designed reception area including a curved desk, feature decoration and TV displays.

Touchdown staff bases were also incorporated into the layout design giving nurses and clinicians an excellent observation point over the wards.

All floors were designed and installed to achieve the response factor (2) required by HTM for night ward accommodation using a hollow rib deck construction infilled with reinforced concrete.

Internal finishes were of a high standard throughout with all doors to the isolation ward being fully encapsulated.

The external finish of the building was a Formica Vivix Rainscreen cladding with the plantroom having a contrasting louvred screen.

Within the top floor plantroom is a large amount of specialist equipment including 17 no. air handling units, IPS and UPS equipment and chiller plant. Each isolation room is served by its own air handling unit to comply with the stringent regulations. These rooms are also monitored by pressure alarms.

Sustainable renewable technologies were incorporated within the building infrastructure along with smart technology LED lighting.

MTX commenced on site in February 2015 with a site set up and site strip works. Throughout the project, MTX had a core project team based on site including site managers, construction and M & E manager and a Health and Safety manager. 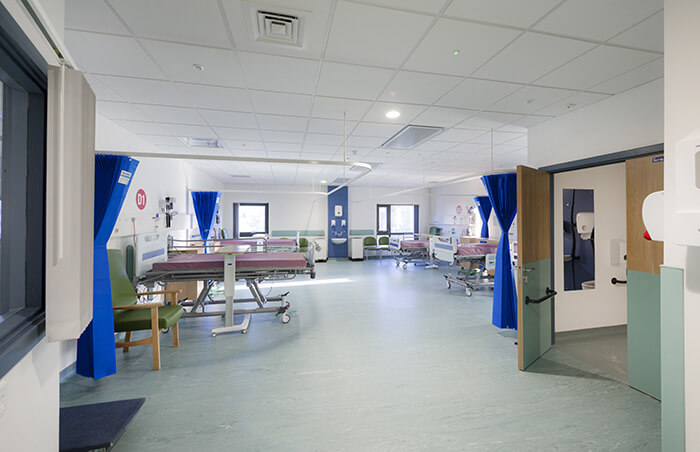 The module installation had to be planned months in advance with the Trust to ensure logistics and careful co-ordination with all elements of the restricted site space and location. Throughout the lifting operation of all 105 modules, the main one way ring road around the hospital along with the blue light route were not disrupted and maintained clear at all times. The module installation was completed in July 2015 with the Trust taking full occupational use of the building in early January 2016.

MTX worked closely throughout the scheme with the Trusts team and capital project manager to deliver a flagship building to a very high standard.

“MTX delivered a great building and enabled the Trust to make use of 63 beds within 11 months. The facility is sandwiched between a 24 hour A&E department and theatre complex and works were undertaken around such crucial clinical services, it really demonstrates careful logistical planning and commitment by the Team which was most reassuring.”