By MTX ContractsJanuary 9, 2012May 21st, 2020Healthcare, Project Portfolio
No Comments 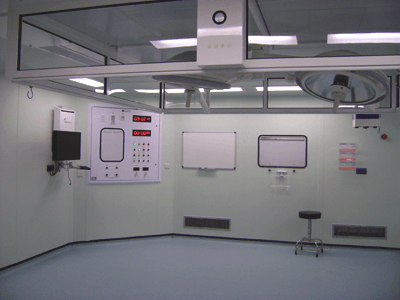 In May 2009, MTX were contracted by NHS Greater Glasgow and Clyde to upgrade and refurbish an existing operating theatre at the Royal Alexandra Hospital in Paisley.

The Royal Alexandra Hospital has 10 theatres all built in the 1970’s however only one theatre (Theatre 8) was equipped with an Ultra Clean Zone (UCZ) suitable for orthopaedic procedures. Due to an increase in orthopaedic requirements at the hospital and the Government set waiting list targets, the need for a second ultra clean operating theatre became apparent. MTX were awarded the contract to carry out works to upgrade Theatre 7 to incorporate an ultra clean canopy, new operating theatre lamps, retractable pendants, new surgeons panel to link in with the hospital Building Management System and upgrade to IPS and UPS throughout. Alongside the theatre upgrades MTX were also contracted to carry out general refurbishment and re-decoration to the theatre, prep area and anaesthetic room.

The programme commenced on the 26 June 2009 with a contracted completion date just 6 weeks later, on the 7 August. Apart from the obvious challenge of having to complete the entire works programme in just 6 weeks, the other major challenge for MTX was to carry out massive demolition works, such as taking down ceilings, removing old operating lamps and surgeons control panels, within very close proximity to the hospitals other theatres, in particular Theatre 5 (used for Eye surgery) and Theatre 8.

Although MTX were only contracted to work on Theatre 7, MTX had to take Theatre 8 out of commission in order to avoid compromising its clinical environment. To minimise any disturbance a hermetically sealed zone was created around the parameter of Theatre 8 to, in effect, moth ball it until works to Theatre 7 were complete. Despite an extremely tight construction programme and the close proximity of Theatre 8, the newly upgraded Theatre 7 was successfully completed on time and within budget and has received excellent feedback from the users and the client.