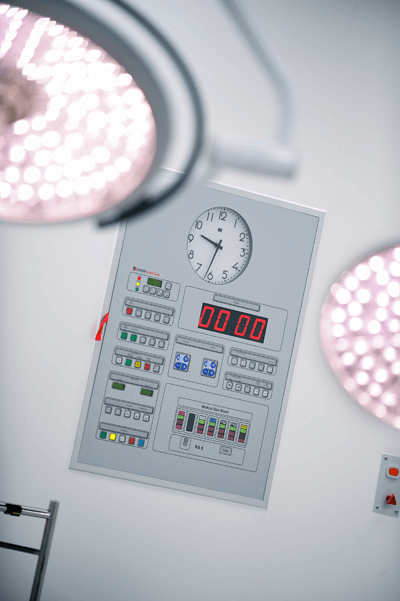 As part of Northumbria Healthcare NHS Foundation Trust, which is geographically one of the largest trusts in the country providing healthcare to over half a million people, North Tyneside General Hospital has built a reputation for having exceptionally low waiting times and modern operating theatres. In June 2010 Dunwoodie Architects awarded MTX the project to refurbish Theatre no. 3, the oldest of North Tynesides’ eight theatres, in order to modernise it in-line with the other theatres.

The project, which commenced in early July, followed a tight nine week programme, a vital deadline set by the Trust due to the limited availability of a temporary operating theatre hired in to allow the renovations to take place without affecting patient waiting times.

As with most healthcare projects, although the majority of enabling works could take place out of hours, most of the major renovations had to take place during the day whilst the other theatres were still operational. This caused an initial challenge for MTX because the electrical circuits to Theatre no. 3 were shared with another theatre therefore, in order to solve this issue, the electrical supply to Theatre no. 3 had to be separated to its own supply to allow the other theatre to remain operational and unaffected throughout the duration of the project.

The major renovations to the theatre included the installation of the most up to date operating theatre equipment including a large 3.2m² Ultra Clean Canopy, upgraded IPS and UPS installations including IPS sanitary ware, a state of the art surgeons panel, a new x-ray viewer and a Peacocks LED Operating Lamp.

A calming colour scheme has been used throughout the newly modernised theatre which is reflected in the new fitted furniture, doors and the vinyl floors, walls and ceilings. In order to allow for easy maintenance and cleaning, the vinyl floors, walls and ceilings feature coved corners, which is becoming increasingly common with modern day operating theatres.

Despite all of the challenges with this project and the exceptionally tight programme, MTX completed the project at the beginning of September 2010 on time and within budget. The client and end users are delighted with the overall appearance of the theatre and are very pleased with the state of the art equipment their new theatre now offers them.